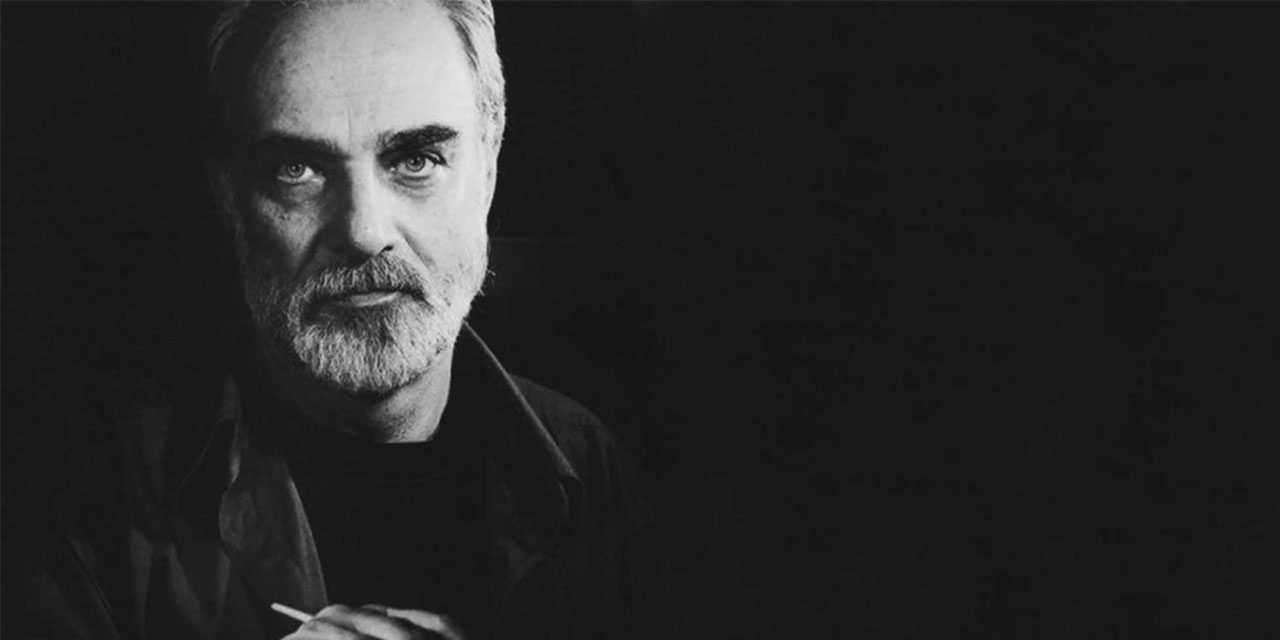 On Alireza Astaneh,Youth and Innocence

It was about two years ago that a young man of twenty-five or six came to visit me. He was strapping, gentle and amiable with untailored short black beard. He had lengthy fingers with carefully clipped nails except for the index one which was too long that took me aback. His tone was soft and gentle, and his speech was full of courtesies, formalities and manner; then he introduced himself: “Alireza Astane” Once Alireza brought his works to show me, a file full of calligraphies, mostly some fine-wrought Nastaligh and curved Nastaligh, among which there were some apparently blank white papers whose emergence would take you a diligent act of perusing so that the hidden nail-calligraphy would dawn on you; it was then that I understood the reason of his index’s long nail. Nail calligraphy has been a special avocation of the Persian calligraphers in which instead of using a reed pen and ink, the calligraphers use their nail to sunken the back of the paper so by shining the light from a proper angle the now protuberant calligraphy can be seen on the other side of the paper. Nowadays, less than two or three people work on this diligently difficult art, Alireza Astane being one of them, and in my opinion one of the most important of them. Alireza used to come from Isfahan to attend my classes, he brought his works and I commented on them; that was all. Thus, I can barely say he was my student as he was a complete master on his own. His regards towards me was dyed in the wood as his art was so. When my father-in-law passed away, among all my calligrapher friends I chose Alireza and called him to ask if he could write the epitaph. He came to Tehran from Isfahan, wrote on a graph paper with a reed pen and ink instantly, and when done, he went as quiet as a simile. Once he wanted to go abroad to pursue his studies, he came to me with one of his friends for consulting. I listened to them patiently, and when they finished I replied that the youths in case of necessity should do anything and go anywhere to boost and improve themselves- I emphasized on necessity- while not forgetting their own identity and ethnic memory which will be carried by them anywhere.
But I doubted that Alireza, a person with this much of dependence on his country’s art, culture and morality can abide there. Later, he told me that the visa was not confirmed. Hence, I said poor them and lucky us. He became quite turbulent a few times ago for his father’s illness and bent over backwards to make the situation better. He drove thousands kilometers between Tehran and Isfahan and vice versa to assuage the problem. I don’t know whether he goes to university or not, anyway it doesn’t matter for if a person is just and right he will appear to be top of the line everywhere, and elevates not only himself but also the others, and will bring happiness and felicity to them. Alireza is trustworthy and the sample of the country’s youths who work, learn, study and, following the world’s affair, try to be up to date now and then. Some of them are rooted firmly in a kind of spirituality that save them from perplexity and ambivalence that they might encounter. Some of them are their family’s bread winners who are successful in managing the family. They have a look on future, fall in love, connect, depart, fight like a lion in the fronts, work an arduous and laborious work from their youth. Many of them get old in their youths, at night wander in the streets with their friends and coevals and laugh loudly that the the misunderstood passersby sidestep. They think that youth lasts for goods, alas it doesn’t. They empower, become brave and beautiful as juvenile is. They crave their share of the world rightfully for they are the deserved legatee of the world and the upcoming days are for them. The whole tomorrow and part of today is for them and that’s why they leave the whole yesterday and part of today generously for the elders. That’s why I love them so much, and among these apparently diverse and variant youths who are acquainted and the same inwardly I choose Alireza Astane as a representative of them and bestow my friendship, paternal affection and support on him. And that’s why I love deeply the handsome, tall young man who studies and works abroad in Toronto, Canada and always fill his lively and fluid mind with love, wisdom and faith- I mean my son Takin- and also that brilliant and diligent poet and painter who on the other part of that city is working on herself so to become deeper and more efficient from day to day- my daughter Tara, as a representative of a better future world that has been always under the sword of tyranny and imbecility.

A book by Aydin Aghdashloo